Feel free to donate if you like my work :)

My favourite sentence from the lyrics is: only those I really love will ever really know me.

7 years is a song by Lukas Graham, soul pop band. Yes, they are a band, named by their frontman. The band is from Denmark. Song was released on September 2015. The ballad topped the charts in Australia, Austria, UK, Canada and many other countries. I probably could say that that's the song that made them noticeable all over the world.

The lyrics, that are at the end of the post, are about Lukas Graham Forchhammer's life and his expectations for the future. It gets really deep and when he gets to age of 60 it gets really sad and heart breaking but so realistic. That's life. The song starts with really cool sound of an old movie projector. The ballad also reminds me on a music box. My arrangement is written in the key of Bb major.

On Official Charts Company, Rob Copsey wrote: »Lukas describes 7 Years as a song about his life so far and what he hopes to achieve in the future. He gets as far as the age of 60, he says, "because my father died at 61. I need to pass it to believe it." He continues: "It’s a song about growing older. I’m also coming to a realisation that being a father is the most important thing. My biggest dream is not to be some negative old dude, but to have my kids’ friends say, ‘You’re going to visit your dad? Say hi! He’s awesome.’ I had a perfect father.”«

On Wikipedia they have found probably the only critical reception: »In a review in the Danish newspaper Jyllands-Posten critic Anders Houmøller Thomsen compares the song to The Beatles' "When I'm Sixty-Four": "The ballad "7 Years" sounds like a current answer to The Beatles' "When I'm Sixty-Four". "7 Years" bubbles with ignited storytelling about life's fast speed, when the daydreams of childhood and youth suddenly becomes replaced by retirement-melancholia. Graham finds his own path between sweet sentimentality and heartbreaking empathy, and like a young McCartney, Graham also has a similar instinctive ability to craft superglue-sticking choruses.« 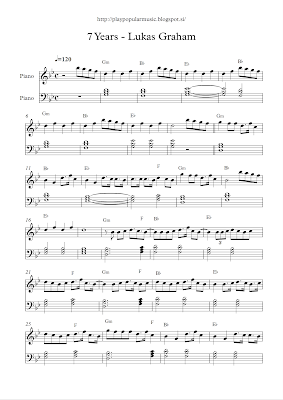 It was a big big world, but we thought we were bigger
Pushing each other to the limits, we were learning quicker
By eleven smoking herb and drinking burning liquor
Never rich so we were out to make that steady figure.

I only see my goals, I don't believe in failure
'Cause I know the smallest voices, they can make it major
I got my boys with me, at least those in favor
And if we don't meet before I leave, I hope I'll see you later

Most of my boys are with me
Some are still out seeking glory
And some I had to leave behind
My brother, I'm still sorry
Soon I'll be sixty years old, my daddy got sixty-one
Remember life, and then your life becomes a bitter one
I made a man so happy when I wrote a letter once
I hope my children come and visit once or twice a month

Once I was seven years old

As an Amazon Associate I earn from qualifying purchases.

Save 60.0% on select products from KEEPCA with promo code 608O3VLR, through 4/30 while supplies last.

Have you checked Jellynote yet?

They offer over 400,000 songs that you can play to learn through original artist video master classes, video tutorials, sheet music (including mine), tabs, chords and instrument view for a wide range of instruments.